Over the last decade it has become clear that the adult CNS possesses some intrinsic capabilities to repair but that these repair processes are being actively repressed/inhibited in most regions. For example, neural precursor cells (NPCs) are present throughout the adult CNS but are only able to give rise to new neurons in two discrete regions of the forebrain, the subventricular zone and the subgranular zone of the dentate gyrus. We are interested in understanding the transcriptional codes acting in these two adult neurogenic regions as well as the signaling that block this neurogenesis in all other CNS regions. This knowledge is a prerequisite in order to manipulate the fate of NPCs in other regions of the adult brain and spinal cord to favor repair/tissue regeneration after trauma. 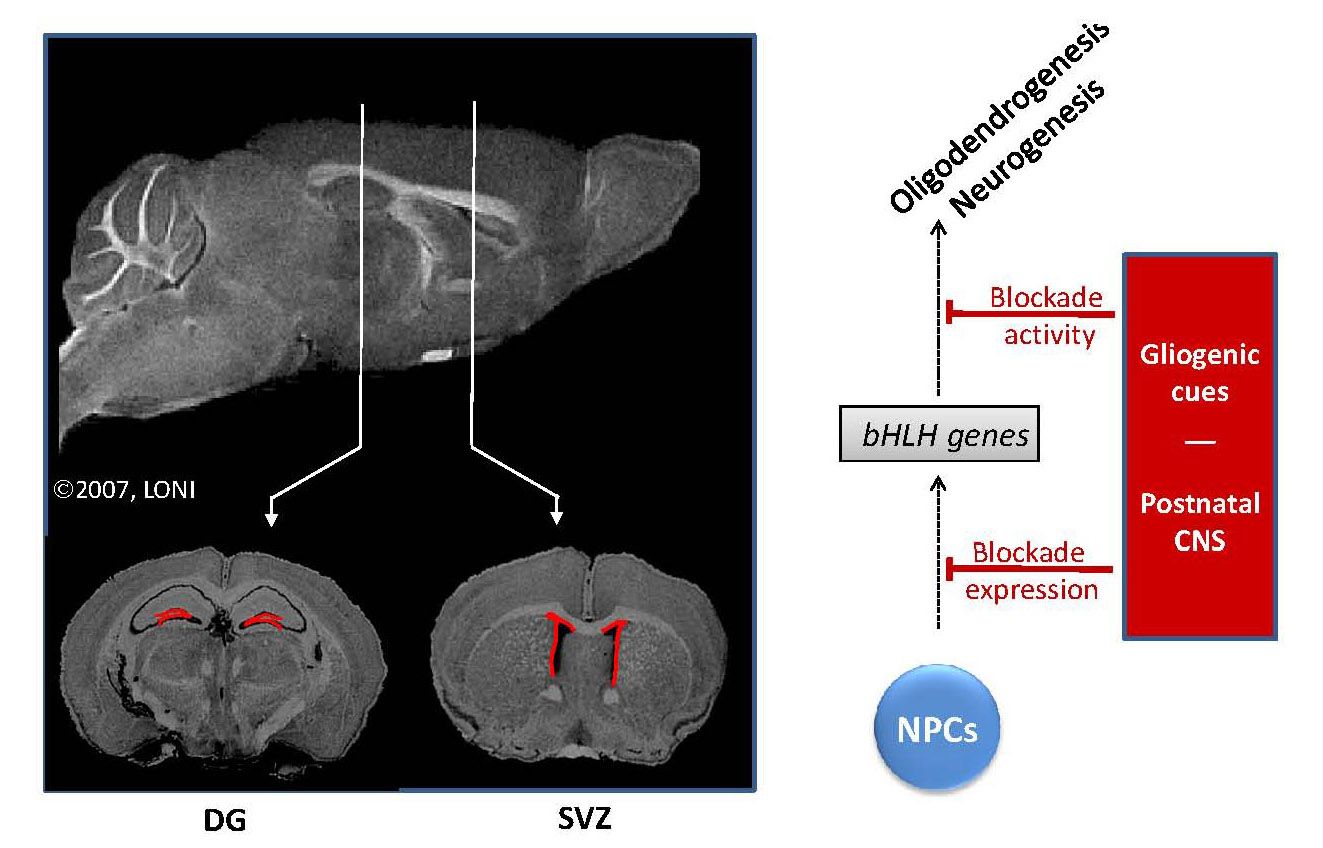 Figure 1: Two regions of the adult brain continue to produce neurons thoughout adulthood, i.e. The dentate gyrus and subventricular zone. Expression go bHLH proneural genes persist in these adult brain regions but are consistently absent outside of these regions. Our research aim at understanding the role fo bHLH transcription factors in adult neurogenesis as well as the mechanism of inhibition (pre-transcriptional and post-transcriptional) of these genes outside of these regions. Our aim is to manipulate these genes in order to favor neural precursor cells (NPCs) differentiation following injury, and therefore cellulare replacement.

Our current projects are:

neurogenesis persist in two adult brain regions: the subventricular zone of the lateral venticule from where newborn neurons migrate to populate the olfactory bulb, and the subgranular zone of the dentate gyrus where newborn granule cells are continuously generated. We are pursuing our work onto the spatio-temporal expression of bHLH transcription factors in these adult neurogenic regions. The differential expression of the two bHLH proneural genes Ngn2 and Mash1 in adult neurogenic regions, suggest a role for these proteins not only in neuronal differentiation but also in the specification of different neuronal populations. By using transgenic approaches, we are currently investigating the fate and function of populations of progenitors defined by the expression of these transcription factors. Furthermore, we are studying how other bHLH proteins might interfere with the neurogenic activity of these proneural genes. 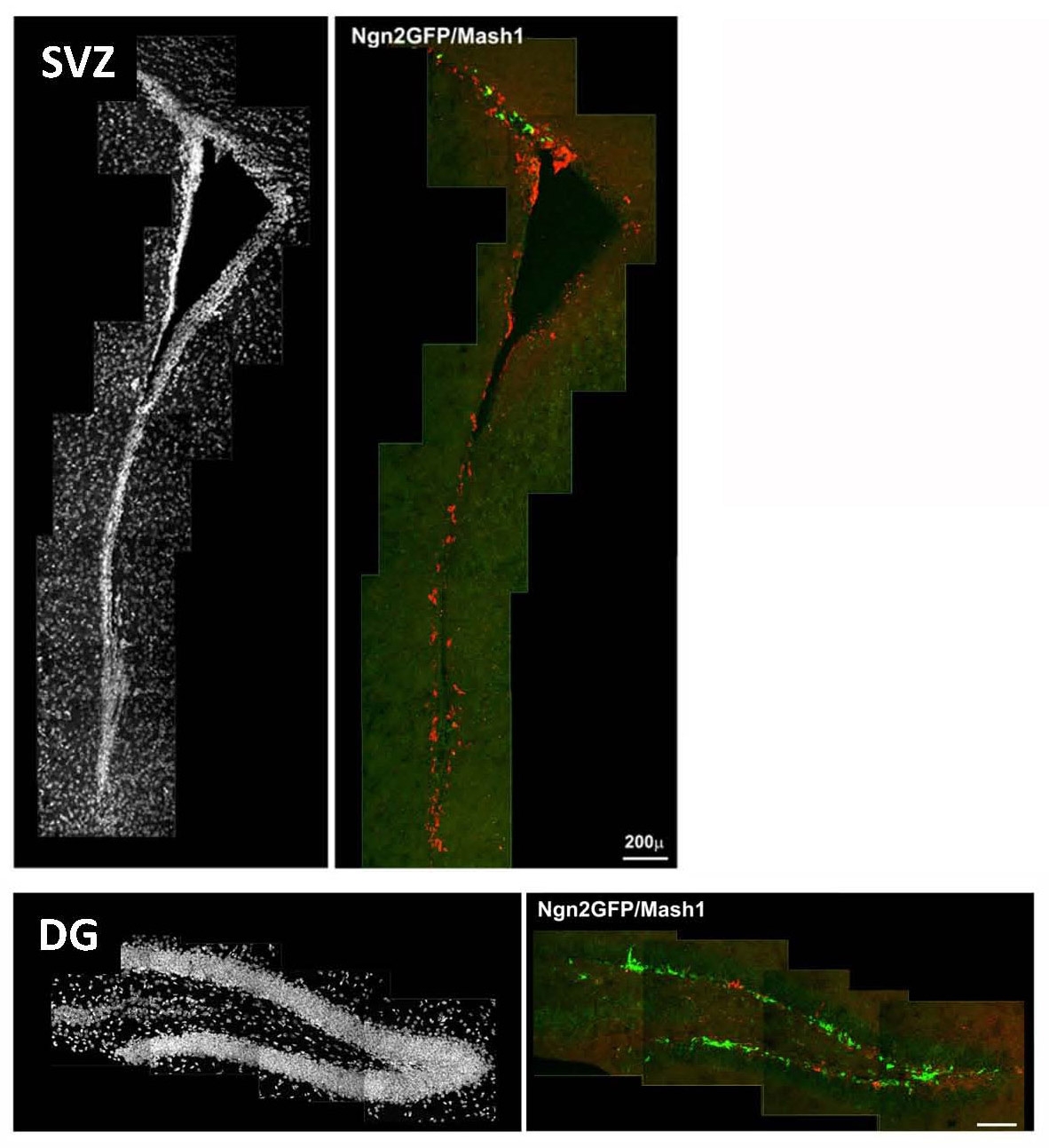 In the recent years it has become clear that the adult subventricular zone is populated of heterogenous population of neural stem cells which are committed to produce defined neuronal subtypes. We are investigating if these defined progenitor cells populations respond to different injury paradigms (i.e. depending of the lesion location and/or of the neuronal cell type being lost).

We are pursuing the idea that bHLH genes over-expression can be used as a strategy to promote neural precursor cells differentiation and tissue repair after injury. Whereas very efficient in vitro, such strategy has so far shown more limited success in vivo. This suggests that bHLH proteins activity is highly context-dependent (e.g. is inhibited by external cues). We are interested in identifying the mechanisms mediating this inhibition, and develop strategies to overcome them. Our long term aim is to translate this work in vivo in animal models of CNS injuries.